I had some bits and pieces of wood lying around drying out that were just begging to be abused. So I dug out a pine hearth, a hazel drill, a holly drill and my trusty teak bearing block (salvaged from an old table leg). I decided to go against the grain and have a little experiment with drill shape. I fly in the face of convention, ha!

In one of Ray Mears' books he says that the rounded end of the drill should go in the hearth because of greater friction and the pointy end should go in the block because of less friction. Seems logical but I was bit bored and decided to have a go with my rather eclectic mix of kit. My thinking was this, if the pointy end was in the hearth then due to its smaller circumference you would achieve faster rotations relative to the amount of effort put in. You would also be able to apply proportionately greater pressure for the same amount of force due to its smaller surface area. Elementary physics something to do with woman in high heels, elephants and who you would prefer to be stood on by! I believe that there are specialist websites for that sort of thing. I'm not sure what happens if the elephant is wearing heels though?

By contrast having the rounded end in the block means that it generates less heat due to slower rotation speeds even though it is presenting a larger surface area. Of course my physics could be completely cr*p!

Either way I went for it. I managed smoke very easily and after a couple of passable attempts at recreating the bouncing bomb effect with flying drills I got a really good ember. This worked for both the hazel and holly drills and didn't take much effort. The reverse configuration seemed to work well though the penalty was greater wear on the pointy end.

An interesting way to spend an hour on a sunny Saturday afternoon. The question is - has anyone else flown in the face of wisdom and tried doing it differently (the bowdrill that is)?

bowdrill,fire by friction, bushcraft
Posted by Jon Simons at 16:51 2 comments:

Ramblers in the mist!

Dianne Fossey I'm not. Anyway, a couple of days ago I went for a walk on Dunkery Beacon with my dog, well puppy really, Barney. Nothing particularly special about that really except we were engulfed in a rather thick mist.

I decided I fancied having a little walk out in the mist mainly because I hadn't done it for so long. It was pretty hairy driving up there because visibility was about 20 feet. Needless to say there were no other cars parked up there when we arrived. Perhaps no one else was stupid enough to deliberately go for a walk in really thick mist. Well, it's an easy path and it wasn't as if I was going to get lost, was it?

So, the two great explorers headed out into the whiteness. It was great fun and I loved it! The mist was like a blanket of silence wrapped round you. There was total and utter silence and it was marvellous. As we made our way up to the beacon itself, I did indeed hear something in the distance. Voices. They were very faint to start with but were growing louder by the second. It was interesting hearing the conversation revolve around characters from the Pirates of the Caribbean series of movies. Eventually 6 young lads came marching out of the mist - clearly they were Duke of Edinburgh scheme judging by their poor equipment and overburdened rucksacks. Only one of them returned my jaunty greeting (perhaps too jaunty considering the weather). Hey ho!

We did reach the beacon in good time. Initially I did think we were alone until I saw a behatted individual huddled with his or her back up against a stone, seemingly engrossed in a book. They didn't look up which I thought strange but they may well have thought I was a nutter as only a nutter would walk up the beacon in a very, very thick mist. They may have been missing a point there.

Wild wolf tracks!!!! (Jump up and down and get all excited) 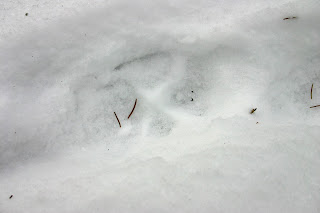 Well this is what we came for and finally we have found some wolf tracks made by a real live wolf and one that is not in captivity. Very, very cool. It has literally been a long slog to find these beauties but we did get there. This time round we were in a different park. We started off on the main track, split the group into three and each group started cutting for sign at different points.

Within 200 yards of our drop off we found day old wolf tracks. The other groups also found wolf tracks of differing ages and some even had urine associated with them. We even found scat in the middle of the track. Needless to say we were all a bit excited by now.

Next part of the plan was to move away from the track and see if we could cut across the wolves trail further on. Well we all slogged off in our different groups and covered quite a distance between us but none of us had any luck in finding more wolf.

We did find lots of other things. We saw a wild boar family unit in the distance, one of which had a very bad limp. 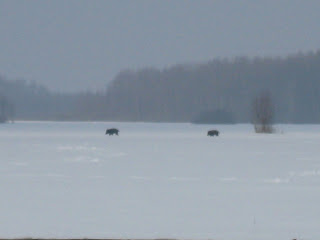 We later cut across their trail and saw them at close quarters and saw that there was puss and blood in the tracks of the wounded boar. It would be lucky if it survived the night. Evening was drawing on so we headed to an observation tower to see if the wolves were going to howl but despite our best efforts at imitating the calls, we had no luck in hearing the real thing!

Back at our digs we entertained the locals by testing out our gear at -18C who clearly thought we were totally crazy. 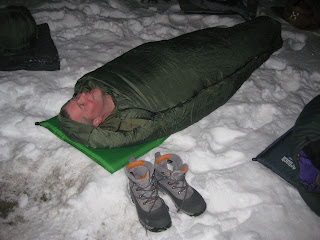 Of course they are completely right!

Tomorrow being our last day we plotted and planned as to possible routes to take, how many teams to use and the such in order to thrash the area and find more wolf tracks. The anticipation was hard to contain but we managed somehow.