Snow, ice and wolves - Part one

Poland is cold in the winter - very cold! Luckily I was well kitted out thanks to people like Chocolate Fish. The big question is, did we see wolves? Well, yes and no so read on to find out more.

After landing in Warsaw our first port of call was a camping shop. The joys of international travel do not allow the transportation of gas canisters for stoves or lighters with which to ignite them. Hence the stop off at a camping shop. I think the locals were a bit bemused by our small invasion. Nice shop though a little expensive. It was then another 3 or 4 hours before we got to our destination, Dobarz. A forest lodge that seemed to be in the middle of nowhere - not quite true but it had a nice feeling of remoteness about it. Having had only about 3 hours sleep the night before (long story) it was a welcome sight. 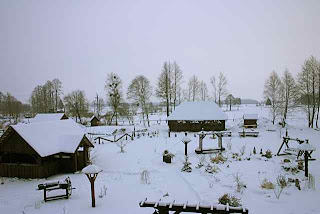 I have to say that the food in both our locations was superb. I'm not a foodie but this was good, filling stuff - nothing fancy but it did a good job in giving you enough fuel to survive the rigours of snow bond Poland. And did we need it!

The next morning was our first foray out into the cold. We were dropped of in some woodland near to the lodge, split into pairs and then let loose. The brief was simple, head on one bearing until you reach the end of the forest, then head back, take a couple of hours to do it, track whatever you want and have fun. We certainly did! I will talk about gear in another post later.

Anyway, we started off by seeing lots and lots of Elk tracks though the majority of them were at least a day old and many a lot older than that. We kept on going in the hope of finding something fresher that would we could follow. About 20 minutes later we got our wish - a roe deer broke cover from its lay up and went racing off. We got to the lay up and could still feel a little bit of warmth in it and started to track. We measured the first bound at about 13 feet long! Awesome! After a while we stopped tracking the roe and went looking for something else and soon came across a brown hare which also did a mad dash - its first bound was about 8 feet long! 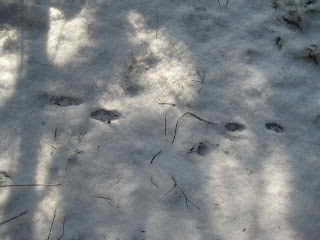 Now we were rocking - tracking hare, fox, roe, elk, hare (again) and so on. We tracked a hare for about 1km, seeing where it had fed, stopped for a lay up, rushed across open ground and generally went about its business. This was when we came across a very fresh set of elk tracks. Excited does not even get close to the feeling. We tracked this animal for what seemed an age and were definitely getting closer all the time, the scat was fresher each time and the tracks were more defined. As we moved up a slope we found what we were looking for about 50 yards in front of us. A huge male enjoying the delights of one of the bushes on his route. We watched for about 5 minutes and he then slowly ambled off. We, not so slowly, headed over to where he was. It was fantastic to see fresh feeding sign and very fresh scat (so fresh it was still melting the snow). We were up for a bit of stalking but realised we had run out of time and had to head back for the pickup. Bummer. But what a great way to start the trip! 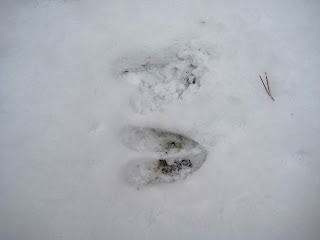 Needless to say this first part has taken me well over a month to complete! Very, very busy in a lot of different ways - some of which I'll cover in the blog! Sometime. Honest. I will.....