Basically, this our fourth full day, was to be a travel day, as we moved areas in order to try our luck in a totally different part of the country.

Our first stop was by a river where we hoped to find sign of beaver. And beaver we found! There was plenty of evidence of beaver gnawing through trees and we found a couple of slides where the trees had been dragged down to the river. 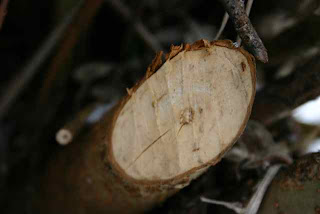 You can see the teeth marks on this stump! (above) 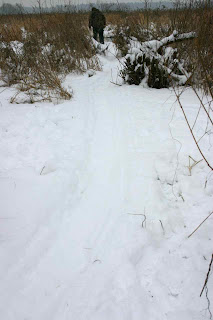 One of the things about European beaver is that they don't build dams. Their lodges are built into the banks and are, in effect, underground. One of the guys managed to find the lodge - by putting his foot through the roof! Luckily beaver are used to repairing damage to their homes. We didn't see beaver in the flesh but we did see where there feet had been :) 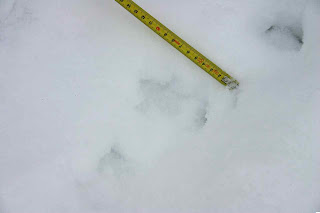 Time to move onto a wildlife sanctuary run by a conservationist who is very keen on reintroducing the lynx back into the wild in Poland. It was a slightly strange place with lots of different enclosure for things like elk, deer, wolves and grouse - an eclectic mix of species to say the least. We entered the park through one enclosure which housed some very friendly elk. So friendly they would give you a good barging if you had the audacity to ignore them! Lovely creatures that could make a very plaintiff and quiet noise but could also do you a lot of damage if they wanted to. 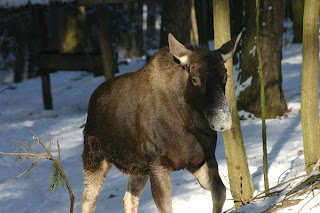 We then moved onto the wolf enclosure and had very good views of the wolf pack and its behaviour - from the aggression of the alpha to the apparent 'aggression' of the omega wolf who would bare its teeth as if it was being aggressive but was, in reality, just reaffirming its place in the pack. Fascinating to watch. 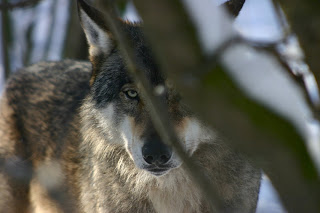 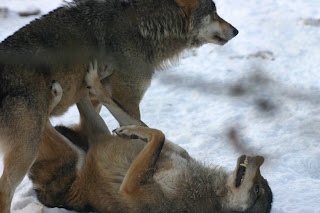 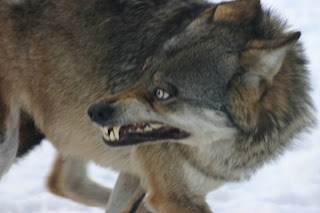 Needless to say we spent quite a bit of time watching the wolves interact with each other and with us!

This is when it started to get a bit surreal. The owner said that he takes a rehabilitated Lynx out for a walk and would show us except that he had left his lead at home. Well being trackers and bushcrafters we soon knocked up a lead. He disappeared off and we were hanging around to see him walk his Lynx on the lead. Well, we were wrong on that score - the first thing we saw was a very high speed Lynx go shooting past us followed a minute later by the owner with his dog on the lead! Not only that but he also had a young deer with him too. It turns out that the deer and the Lynx were best of friends and played together all the time. 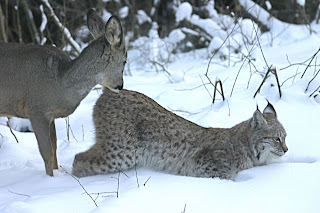 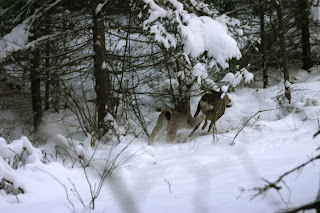 Like I said - a bit surreal but a brilliant thing to watch them play and chase with each other. Awesome!

Well, I'm on Twitter now (god help me!). I thought it might be a useful way to keep people up to date in a quick format.

Our third full day - it makes it sound a bit like Big Brother, doesn't it? Anyway, today's plan was for another route march - this time about 15km. Again this doesn't sound like much but it is when its -18C and you are slogging through knee high snow! Dammed good fun though!

This time the route was going to be mainly through woodland with a little bit of open 'meadow' (not marsh this time). 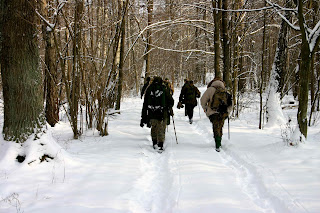 To start with we had the usual suspects - elk, fox, brown hare and the like and we seemed to have a lot of urine this time too! As we moved further into the woods we came across some beautiful bird impressions in the snow. They were so good you could tell a whole story around them. This, of course, is the ultimate aim for a tracker. 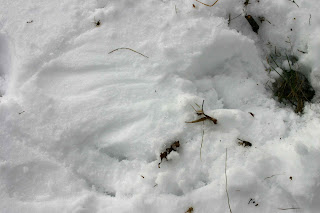 The story was being able to see where the bird landed, had hopped a few steps, where it had fed and then flew off. You can clearly see where the tail has pressed into the ground as the bird took off again. Then about 50 yards further down we found where it had landed again and had another feed. Very cool. 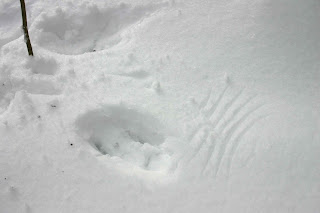 One of the guys decided to follow a set of fox tracks and see where they led. Eventually he followed it to a kill site - a very interesting kill site. 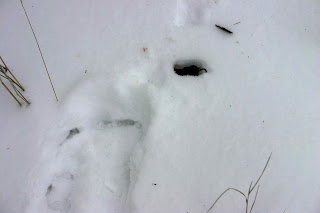 Mr Fox had killed this shrew, dumped the body and pee'd on it! Quite extraordinary. Well, we trudged on and had a final bonus for the day. Pine Marten. Absolutely brilliant - a great find and fantastic to see where it had been and what it had got up to. 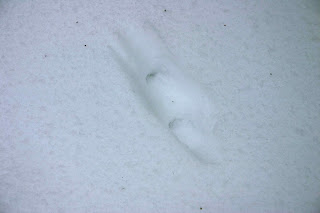 It was a long hard day but well worth it. The next day was to be a travel day but that one ended up being a very different day indeed. 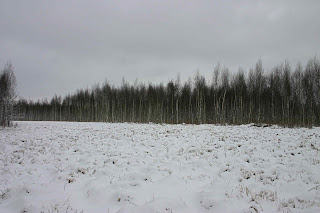 This, our second full day, was, in effect, a bit of a route march! We needed to cover a lot of ground - through forest and over frozen marsh. It promised to be a hard day.

We split into 2 groups with a view to meeting up in the middle and then going our separate ways again and thus covering more distance. Anyway, the guide we were with was a very tall chap with really long legs who seemed to be walking slowly until you actually tried to keep up with him! After 20 minutes we were sweating buckets which is not a good thing when the temperatures are so low. We stopped for a quick zone in and managed to get him to slow down - phew.

The first part of the route was forest where we saw plenty of tracks of elk, fox, red deer and roe deer. After our little stop we headed out onto the marsh which was even colder due mainly to windchill. It was here that a most amazing thing happened. Three of us stopped for a moment to look at something when a vole popped up out of nowhere and tried to climb up Ros' gaiter! It had a really good try for a minute or two before it decided to head off into one of its tunnels again. Fantastic stuff.

As we moved out onto higher ground we started finding more tracks again - this time, weasel, stoat, more vole and bird. 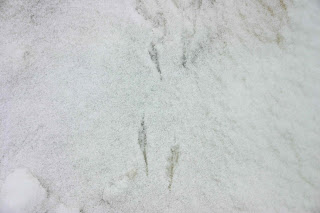 With the weasel tracks is some fresh urine. Though it is hard to see in this photo. 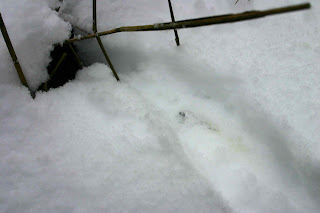 After a quick lunch stop we headed off again to cut across more marsh when we came across a wild boar lie up, less than 100m from where we had lunch - and it was fresh, still warm and had fresh scat. We had probably disturbed it when we stopped for a snack! 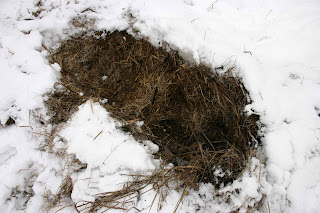 The next leg was going to be a long slog across the marsh which was very hard work and had the constant risk of falling through the ice. In many ways, not a lot of fun but a great experience nonetheless. Anyway at one point we went through a small bit of woodland and found fresh boar tracks - four of them in fact. We trailed them for quite some distance until we actually ended up coming up behind them where they were foraging. They knew we were there so ambled off after a few minutes but they did circle us for a while to maintain the wind advantage.

The boar track is a little indistinct in this photo but you can still see the shape and the dew claws (on the left). 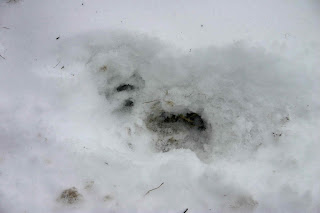 What looks like an attack by a bulldozer is the result of a bit of wild boar action! 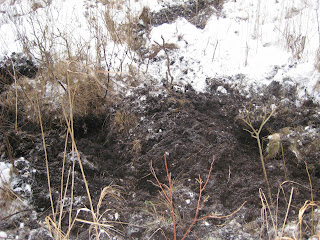 After that excitement we had quite a few clicks left to do through the marshy wastes. In terms of spoor it was a bit disappointing but again it was a nice sense of achievement to complete and survive! Overall we covered about 10km. That may not seem like a huge distance but through that kind of terrain and through knee-high snow in places, I can assure you, it was long enough.