Take a look at Pablo's view of the difference between trackers and bushcrafters. It's pretty much on the money! 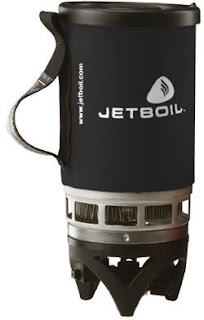 As you know from my previous post, I have just got back from Alaska. Well, a day and half later I was out in the woods helping out on another weekend tracking course! This was still for Shadowhawk but this time facilitated through Jonny Crockett and Survival School. It was a very good course and all the participants were very switched on.

This time I'm not going to go on about the course but a bit of kit I bought a few weeks ago - the Jetboil PCS (Personal Cooking System). A lot of people I know seem to dislike this pice of wizardry for some reason but I took a chance and got one from Strikeforce Army supplies.

This little beastie is essentially a big cup with a heat sink attached to its bottom and a gas burner. The burner snaps onto the base and uses a standard camping gas cylinder which screws into its base forming quite a tall tower. It has an electric spark push button for ignition (just like your gas cooker at home). It seems to be very efficient at heating the contents of the main cup. It will boil 2 cups of water (maximum fill) in under 2 minutes if you have it on full blast. I used the Jetboil over the weekend quite extensively and I have to say that I like it - it is fast, efficient and quite convenient to use.

It boiled water quickly for cups of tea, it cooked/heated up some packet rice without any problems and it can cook a standard British Army ration pack in a few minutes. It could probably be safely used in a car for a quick brew but I haven't tried that yet! The burner is stowed in the cup but you have to detach the gas cylinder to do this. The downsides? It does form quite a high tower when everything is attached and so could be a bit unstable on rough ground and it can also be a bit awkward separating the cup from the burner, potentially resulting in spillage or worse, scalds. You also cannot really use it with other pots or fry pans so it does limit you to what you can cook in the cup.

Overall I am glad I spent the money on it. It's not cheap but it did everything I wanted and needed over the weekend. If you plan your food to suit the jetboil then it is a very convenient and easy to use bit of kit. You don't need matches as the ignitor is build into the burner which is a bit of a plus too! However, I will use other forms of stove if I want more flexibility with my cooking.

Now I know what you are thinking - what has Alaska got to do with bushcraft on Exmoor? Actually, nothing at all really except for the fact that I did some tracking whilst I was out there.

It was one of those mad trips because my sister decided to get married on Kodiak Island which is off the coast of Alaska. I flew out on the Friday and had to overnight in Anchorage, then fly to Kodiak on Saturday, wedding on Sunday, fly back to Anchorage on Monday and then leave for home on Tuesday morning. I think I travelled something like 16000 miles in 5 days! Needless to say I'm a bit tired.

The wedding was to be performed by the harbourmaster, of all people, on his boat. So, part of the deal was a boat trip to one of the smaller islands, a walk around for an hour or so, back to the boat for the ceremony, dinner, then a leisurely cruise back to base.
Our first visit was to see some of the local sealions, who were all terribly stressed (NOT!).

These guys make some very interesting noises and smells. If you get downwind of them then you know it! Very fishy. They also like to do a lot of snorting which carries a surprisingly long way over open water.
There were plenty of seabirds such as 2 species of Puffin, cormorants, kittiwakes, shearwaters, murrelets and quite a few Bald Eagles. Very good to see those in such numbers and also with youngsters.

We also saw a Sea Otter going about his business. I wasn't close enough to get a decent picture of the beastie but I did find feeding sign on the island.

These were the remains of various shellfish eg crabs, mussels etc. Unfortunately, as this was literally on the edge of a rocky beach, there were no easy spoor to see. There were a large number of compression shapes in the pebbles which could well have been otter but I'm certain some of them were deer - which are well known to roam that beach.

There were other sign of deer such as compression shapes in the soft moss that carpetted the island as well as some evidence of feeding. We headed back to the boat for the wedding ceremony and on our cruise back we were shadowed by a humpback whale! Absolutely fantastic. I don't suppose that many people can say they had a whale as a guest (without being rude to someone of course).

I have just come back from 3 days at the Wilderness Gathering. For those of you who don't know what the Gathering is, it is a 'festival' of bushcraft. It is very family orientated and has lots of stalls and a fair bit for the kids to do as well. The overall theme of the show is bushcraft and has lots of people wandering around with knives and axes but it is all very good natured. For more information on the venue and the show in general follow this link The Wilderness Gathering.

Anyway, I was there mainly to work on the Shadowhawk stand but also to promote myself and Tracks4life. On both counts we did well. I sold a bit of kit, Max (Ian 'Max' Maxwell who owns Shadowhawk) sold a fair bit of kit and generated a good interest in his courses. We also promoted some joint ventures such as Family Tracking courses next year hear on Exmoor.

Ros spent a fair bit of time tweaking Max's literature aiming for consistency throughout his promotional material as well as planning out the stall and its general look. Max was well chiuffed with the results and he is now more than happy for us and the other instructors (Nick, Duncan, Jamie and Rod) to take more responsibility in helping Max run courses. This is an important step as Max is doing more television work and is not always available.

We had great fun setting a competition based on scenarios we created in a spoor pit and the Junior tracker competition went down well also. Nick and I ran the tracking masterclass in the same way we did last year and that seemd to go down well too. Max was happy. The weather was very kind to us and stayed dry for the whole time we were there.

All in all a good few days and great for the family too!