Man survives 54 hours out at sea

Michael Graham, 49, left Fort de Soto, Florida, for what he thought would be an overnight fishing trip. Unfortunately his canoe capsized and he spent the next 54 hours at sea until a casino ship, 11 miles off-shore, spotted him.

At the time of his rescue his joints were very stiff, with cuts and bruises to his legs, arms and feet. He also had a number of splinters in his hands even though his canoe was made of fibreglass and he had no wooden objects with him. Go figure!

He got caught in a storm about 2 hours into his trip. As he capsized, Graham managed to grab a lifevest, a bait bucket and his knife. He always knew where north was from landmarks on the coast.

He used his upturned canoe to provide protection from the blazing sun but also noticed that he had company in the form of a couple of sharks. Graham said that all that he did to survive came from instinct and what he learned from the "Worst Case Scenario" survival game he used to play with his daughter. The thirst was worse than the hunger - "The tip of my tongue actually feels like it shrunk a little or something because I was so parched. If somebody offered me a million dollars, I would have slapped it out of the way, just to get a bottle of fresh water."

During his ordeal he saw many cruise ships, tugs and small planes but none saw him until a casino ship nearly ran him down. He realised it would come within 200 yards of his position so he mustered all his strength for a final sprint swim and was finally rescued.

The next time he leaves on a fishing trip, Graham says he will give someone his float plan and take a whistle!

And the moral of this tale - even a little knowledge and minimal equipment can save your life. The simple expedient of carrying a whistle may have effected his rescue sooner. 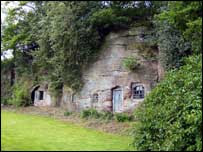 This cave house, at Wolverley near Kidderminster, could be the ultimate bushcraft/primitive living house.

The one-bedroomed house hasn’t been lived in since the late 1940’s. However, there is a front lawn and woodland above and to the rear of the caves, but the house doesn't have any amenities such as electricity or running water.

Also included in the sale are three other adjoining caves and nearly five acres of mixed woodland and associated garden land. The auctioneers admit that their suitablility for human habitation is "open to question".