Well dear old Bear Grylls has been interviewed and has made some comments about Ray in return!

I love boy scouts. One of the best things this country has ever done is boy scouts. I love Ray Mears. He's brilliant. He's so rude about me in the press, it's outrageous!"

A very clever interview I thought!

I know this is old news but hey, what can I say! Take a look at this article in the Daily Mail regarding an interview with Ray Mears - Bear v Mears.

What interest me about the article is this -

'I think the viewer knows that if you want to really know how to take care of yourself in the wild, I'm the person to talk to.'

Ray Mears
Posted by Jon Simons at 13:41 No comments:

I won't copy out the whole story but I will describe the salient points. A former pest control officer got lost in the Australian Outback and thought he would die until he stumbled on a termite mound and "got stuck in".

Theo Rosmulder survived for 4 days eating termites and other insects before being found by local Aborigines. All he had with him was a penknife, a torch and a metal detector. He believed he wouldn't be found so decided to "crawl into a hole and just call it quits". After spending the night in a cave, he chanced upon a termites nest, knocked the top off and began to eat them. A Western Australia Police spokesperson said the termites had provided him with moisture and protein!

Mmm, let's think about this for a while. It certainly makes a great story but how likely is eating a bunch of termites going to keep you hydrated? Personally, I don't think it would help at all and could possibly worsen the situation - here's why.

To start with, there is going to be very little protein in your average soldier termite. They are going to be mainly chitinous exoskeleton and not a lot else. The body uses water to metabolise food, and protein is the worst culprit for using up your internal stores of water. So, that being the case, by harvesting and eating these termites he may well have used up more water than he would have gained and thus compromised his own survival! You can certainly live for quite some time without food so, again, eating the termites was probably not the best plan. If you have little or no access to water it is better not to eat - even if the food is available due to the amount of water used during metabolic processes.

He said he was holed up in a cave and had basically given up hope. To me, this means he probably spent a lot of time in the cave where it was cooler and shaded and didn't do much 'work'. This would have reduced the amount of water he lost through perspiration. That is probably what saved him - not the termites! He may well have been well hydrated before he got lost and this would have helped considerably as well.

Overall, I don't think the termites helped at all but like I said, it makes for a good story!

survival
Posted by Jon Simons at 15:52 No comments: 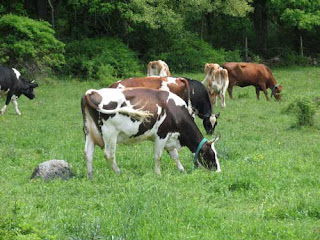 This is an amazing piece of research conducted by scientists (so it must be true). It would seem that the humble bovid has a tendency to orientate themselves on a north-south axis!

Researchers have shown that cows have a good sense of direction and tend to point towards north. They are also pretty good at weather prediction. Scientists from the University of Duisburg-Essen studied images of cattle from Google Earth and noticed that they tend to face in north-south orientation. These images were from a number of different countries and continents, at different times of day and in a variety of daylight conditions, so the scientists concluded that the common factor in all cases had to be the earth's magnetic field. Pretty cool, eh! Many of the images weren't clear enough to show which way the cows were pointed, in other words whether they were head onto north or tail on.

The researchers also looked at deer and found that they tended to face north when grazing or resting in a similar way to the cows. This ability of cows to find north is thought to be a throwback from the days when their wild ancestors needed to migrate across the plains of Africa, Asia and Europe.

I always knew there was more to a cow than meets the eye. How useful this could be in terms of natural navigation, I'm not sure. My gut feeling is that there will be a lot of local factors that will influence a herd of cows but I shall certainly be taking more notice of them in future to see if the there is any 'truth' in the whole thing.
Posted by Jon Simons at 15:18 No comments: