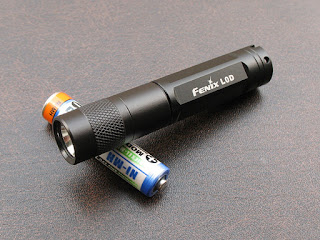 I recently became the proud owner of a new gadget! They do say that small ones are more juicy and this is definitely the case with the rather diminutive Fenix. Now I have said that this is a review - perhaps a grand term for some ramblings by me, so please bear with me.

First of all I would like to to say that the service from Quality Flashlights (from whom I got the torch) was superb and the price was competitive at £25.95.The tech specs are taken directly from the web site:

The specs don't do it justice - it is just quite awesome for such a small light. I decided to test it against a couple of my other torches, namely a Maglite 2 D cell and a Stormlite pocket torch. As I said, this is not a comprehensive or very technical review, in fact it is quite subjective, so here goes.

Much to the dismay of my family I disapperared off to a darkened room with a handful of torches. I lined up the torches so they were shining on to the same bit of wall giving me my start point:

The Fenix gave the purest whitest light, the Maglite was quite yellow and the Stormlite had a purplish-pink tinge to it.The Fenix had the widest 'spot' (set on max brightness for all tests), the Stormlite second and the Maglite third (set on spot throughout the comparisons).

The Fenix had the most even spill from around the spot and the widest, next was the Maglite with a more uneven spill and the least spill was from the Stormlite.

I staggered out of the dark room into a dark paddock for the next test - the distance test. This is where the Maglite shone (pardon the pun!). It maintained its spot over the longest distance (50m+), next was the Fenix which wasn't exactly a spot but threw a usable (but diffuse) light out to about 40-50m and then the Stormlite only managed about 30m of usable diffuse light.

I am mightily impressed with the Fenix. It produces a phenomonal amount of light from a very small package. It makes for an excellent EDC or in survival kit. Batteries are cheap. The different running options are very good - the strobe is very eye catching over distance as is the SOS strobe. I may do a distance experiment if 'er indoors is willing to stand outside, as I drive up the beacon increasing the distance from about 1 mile to 1.5 miles, to see how visible it is.

Having said all that, one of the most impressive features of the Fenix is the lanyard ring . What, I hear you cry! The clever people at Fenix have cut a small section out of the base ring so that the lanyard ring can fit into it making sure that the torch can stand upright and act as a candle!

Well thank you for reading this rambling 'review' and I hope you find it useful. All I have to do now is justify buying the L1D which has almost double the maximum lumens output and about 3 times the runtime (at lowest setting) for only £5 more than the L0D.
Posted by Jon Simons at 20:39 No comments:

Yesterday, I posted up the majority of my new website (www.tracks4life.com). There are still a few things left to do on it, like fix some dates of courses but it is there for the world to see.

I hope you go have a look and enjoy it.

PS I must start posting some more interesting things :)
Posted by Jon Simons at 15:09 No comments: